The Architects of Future e-Mobility: The Story of a Wingsuit that Outdared Gravity 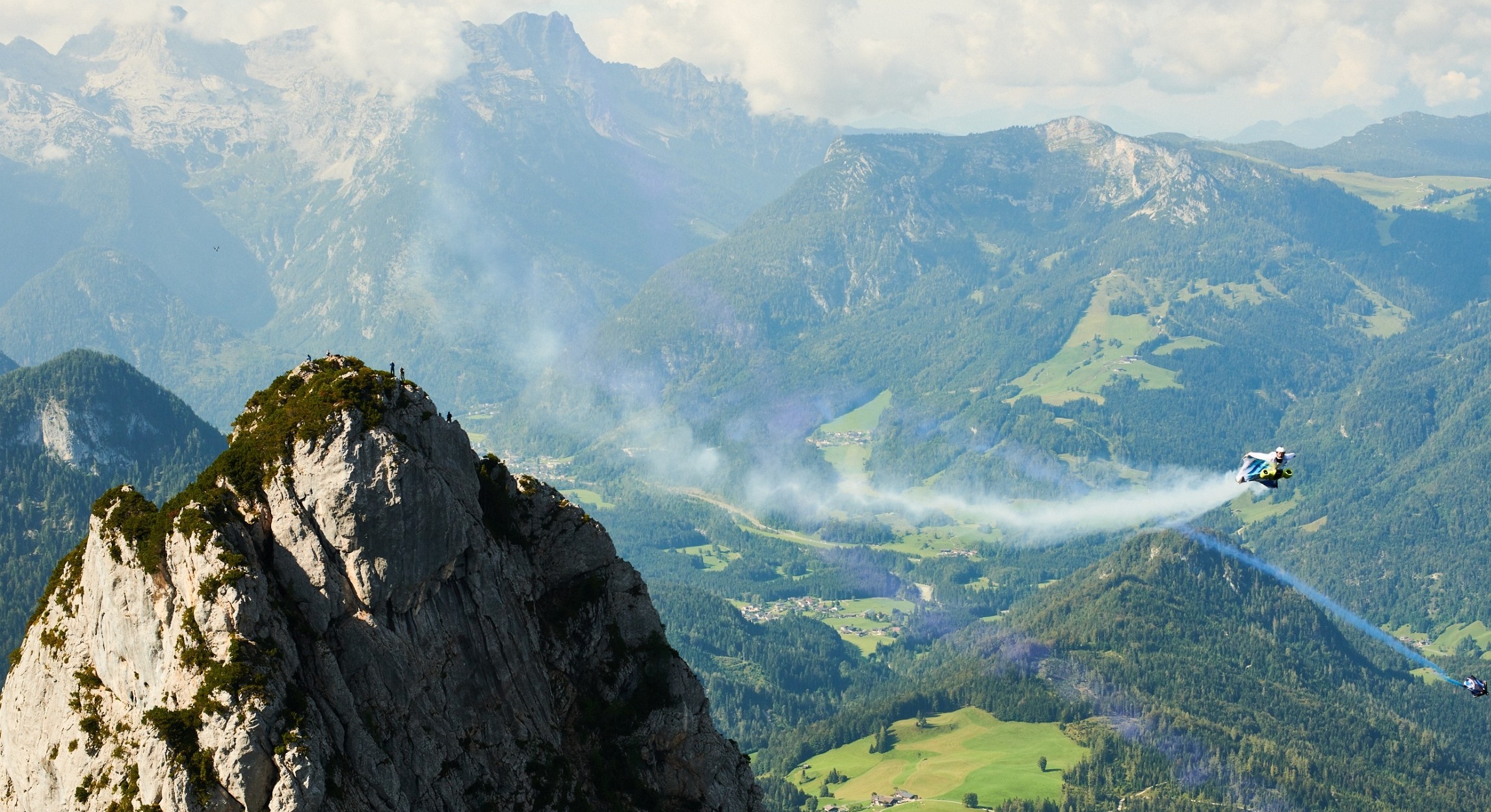 “Every day we stride forward. Further into the great unknown. Sometimes beyond what’s rational and reasonable, most likely beyond our own hesitations. Because ‘beyond’ is where our dreams live…”

Our latest project commissioned by the BMW i brand gave us the exciting opportunity to illustrate our design approach while in uncharted territory.

In 2017, Austrian professional basejumper and skydiver Peter Salzmann and the BMW i team asked Designworks to support them in enabling the first ever electric wingsuit flight. Three years later, in November 2020, Salzmann jumped from a helicopter at an altitude of 3,000 meters and reached an e-powered speed of over 300 km/h for about five minutes over the Austrian Alps.

While not the first time BMW i has asked Designworks to push the boundaries of e-mobility, this was on a completely new dimension.

Taking a cue from Salzmann himself, we dove into the unknown to realize this dream.

A climbing flight in an electrified wingsuit, powered by assistive propulsion technology presents an entirely new combination of technology and performance.

To bring this to life, the power unit components and battery had to be designed to ensure conditions that could increase gliding time, enable a dynamic upswing after a short descent, and allow the wingsuit pilot to fly further than ever before and land safely in a suitable place.

From Vision to Reality.

Creating the idea of an electric wingsuit aiming at entering unknown territory is one thing. Getting it done, certainly is another.

Salzmann knew very well, that “getting it done” hinged on bringing together the right partners, and he found them in BMW i and Designworks.

While BMW i contributed a future-oriented approach to electric propulsion systems, advanced knowledge in innovative materials and technologies, Designworks brought together a creative vision and critical supporting partners within and outside the BMW Group to realize this inspiring project.

We are always excited to jump in and use our mindset as Architects of Future to help bring to life the most ambitious mobility visions for the BMW Group—and the wingsuit collaboration exemplified this commitment.

Behind the Fly Unit.

Salzmann had an idea for an “impeller,” which is basically a propeller enclosed by tube-shaped housing. The joint development process of this fly unit resembled an exhilarating and detailed roller coaster journey on which plans were made and tested, rethought, adapted or abandoned altogether. While the requirement was to create lightweight construction that would enable the pilot to gain upswing while in the air, it was clear the very first time Salzmann tried the fly suit on, that it would still be too heavy.

Undeterred by the challenge, the team pivoted to a smaller model (around 40 inches wide) which was then fine-tuned via wind tunnel testing.

“For us as designers, it’s the freedom to experiment, to envision unconventional paths and to test and iterate that makes projects like the e-wingsuit such a dream to work on.”

The final fly unit resembles a futuristic mini-submarine. It gets its electricity from a 50 V lithium battery, weighs in at around 26lbs (12 kg) and is attached to the pilot’s breastplate by means of a hinge unit. The two carbon impellers in the lightweight carbon fiber and aluminum structure have a combined output of 15 kilowatts and run at a speed of around 25,000 rpm.

In parallel to designing the fly unit our team created the overall graphic design concept for the wingsuit system which included the suit, fly unit, helmet and parachute. The challenge in doing so was twofold: On the one hand, the design needed to visually support and carry on BMW’s e-mobility story into the air. On the other hand, it had to keep in mind the requirements of the film crew that would later shoot the maiden flight.

To support the e-power story to be told to the world in the best possible way, Salzmann’s wingsuit was designed to clearly stand out from the ones of his companions while deliberately restraining itself in view of the fly unit—the true hero of Salzmann’s equipment. This enabled the film team to make the story graspable within seconds, and to create a highly emotional documentation in which the graphic design intelligently added visual power and energy.

Throughout the creation process Designworks not only supported a fearless, boundary pushing athlete in his discovery of new horizons in his own discipline, but we also brought together amazing teams to realize a future vision and push the boundaries of e and i mobility into the skies.

“Making the future tangible—from a crazy idea to its realization—there’s no better reward than being able to realize your vision. I’m so proud that the team got the job done… and when I saw the first video of Peter gaining altitude while the other pilots descend, I was literally speechless!”

Find out all about the innovative fly unit, the maiden flight and the spectacular video documentation covering the premiere: https://lnkd.in/d5ABx3G